Millions of people have allergies, and mould is a common irritant. Mould is also a known trigger of asthma. Symptoms of exposure to mould can be as simple as a stuffy nose or watery eyes. In some cases, they can be much more serious. Certain types of mould give off toxins that can be the source of serious health issues.

Common symptoms of exposure to mould range from the following: 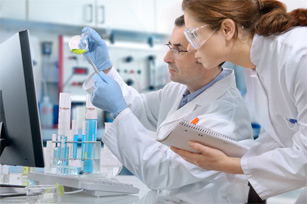 Not everyone has the same sensitivity to mould so it is possible for one person to experience discomfort while others living in the home to have no symptoms whatsoever. Individuals at the greatest risk include:

While mould exists everywhere, it sometimes takes on a dangerous form. The scientific name for the greenish-black mould that turns up on the carpet, wallpaper, ceiling tiles, air conditioners – even wet leaves – is Stachybotrys Chartarum (see inset). It produces a mycotoxin that causes mycotoxicosis, and is thought to be the cause of “sick building syndrome.”Strong associations have been made between mould and various adverse effects on human health. Many are known to cause allergies such as hayfever; some are known to be important triggers of asthma.

Tests conducted on building occupants suffering allergic symptoms reported responses to fungi found in air conditioning ducts. A 1994 study found that repeated exposure to spores or other parts of fungi commonly found in indoor air could result in allergies such as asthma and rhinitis; extrinsic allergic alveolitis (a group of lung diseases) or hypersensitivity pneumonitis, which has flu-like symptoms; ‘sick building syndrome’ including symptoms such as headache, fatigue and mucosal complaints; or organic dust toxic syndrome recognised by tightness of the chest, bronchitis and asthma. Those with impaired immune systems are most at risk 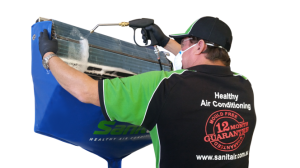 If your air conditioner is contaminated you are at risk. Sanitair trained technicians will eliminate the source of these issues and neutralise the risk to you, your family and your staff.

Despite an image as the nation which loves the great outdoors, Australians spend some 90% of their time indoors. As a consequence, indoor air quality and the health problems created by contaminated air are issues of very significant community health concern. It is now well documented that poor indoor air quality leads directly to a number of worrying health effects on the occupants of affected buildings. These range from minor skin and eye irritations to asthma, allergies, respiratory complaints and suppression of the immune system. Legionnaires Disease is just one deadly example.

A World Health Organisation report in 1995 estimated that up to one-third of buildings in industrialised countries are so-called sick buildings. In Australia, the CSIRO concluded in 1998 that this problem cost 12 billion dollars per year in lost productivity and illness. The issue of air quality is one with very real health and economic implications. It is with good reason that this topic is now among the most hotly debated in the environmental medical literature.

While we all enjoy the comforts afforded us by modern air conditioning systems, it is important at the same time that we recognise them as a source of potentially harmful micro-organisms and take steps to ensure that they are properly operated and maintained. By simply ensuring that the air delivery systems in modern buildings remain free of biological contamination, we can go a long way towards improving the health and quality of our indoor environments.